The remainder of our drive Wednesday was uneventful.  We decided we would stay in Nashville.  We decided to stay on the east side of Nashville as to avoid driving through downtown during rush hour traffic.  Road weary, we were fortunate to find a hotel room on our first attempt.  It was near the airport, and over run with early 20’s somethings.  This was one of those instances where you find you’re having thoughts similar to those of your parents from years ago.  “I hope these damn kids keep it down.”  Fortunately, none of my predetermined ideas about those “damn kids” came to fruition.  Or perhaps they did, and we were too exhausted to be roused from slumber.

We put down just under 1000 miles yesterday, arriving in Nashville before 11pm.  After a restful, yet short night of sleep, we hit the road again at 8am.

This was my first venture into Tennessee.  The Great Smoky Mountains covered by lush forest was a treat to drive through.  The scenery was spectacular.  We noticed a sign on the roadside referencing the Oak Ridge Site.  An interesting read on Wiki for anyone unfamiliar with it.  The secretive efforts of this site helped secure the allied victory in WWII.

Without much of a break we moved from the Smoky Mountains into the Blue Ridge Mountains.  More spectacular scenery coupled with exhilarating driving.  That is, when able to extract yourself from behind those with a less aggressive lower extremity known as your right foot.  Having lived in Southern California for nearly 15 years, I drive aggressively and fast.  I love the feel of a car working the hills and curves of a mountain road.

Driving through the mountains rekindled my thoughts of the PCT.  Being on the eastern side of the country, my mind moved from the PCT to the Appalachian Trail.  The eastern sister of the PCT.  Then it hit me.  We are going to cross the AT in the Smoky Mountains!  As Brian and I often do, we were sharing a brain.  Excitedly, I asked him to find out where we crossed the AT.  He showed me his phone with a giggle, saying, “I’m already looking it up!”

I veered across two lanes of traffic, to barely catch exit 451.  At the end of the off ramp, we spotted a thru hiker leaning against a tree on his phone.  I pulled up to him and asked him if he knew where the AT was.   He said, “Yeah I’m hiking it,  I believe the trail connects back up around the corner.”

We thanked him and moved down the road to find a white blaze belonging to the AT.  We had easily found it.   We parked the car behind a few others, presumably day hikers.   We hiked up a rather steep stone staircase built into the side mountain, to find an aged sign detailing various distances to other waypoints on the trail.  We snapped a few pictures. 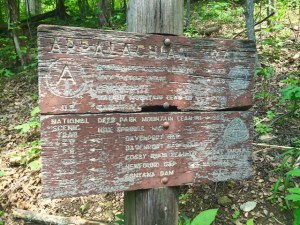 After returning to the car, Brian made the comment when I return from the Camino de Santiago, I will have been on the PCT, the AT, and the Camino within a year.  I added, we would also stop in southern New Mexico and walk a few steps on the Continental Divide Trail, just to have walked on the triple crown and the Camino in the same year.   Mind you, I will not have hiked any significant mileage on either the AT or the CDT, but a neat thing in any case.

We finished our fast and furious rally through the mountains.  Running low on fuel and our bellies running on empty, we stopped in Asheville to take on prehistoric liquid sunlight and satiate our hunger.  The service station we found satisfied both needs having an attached Subway sandwich shop.

Back on the road we rounded out the rest of our road trip.  We arrive in Graham, NC around 5pm..

The rest of the evening has been spent catching up with family.  The mood has been very upbeat, with moments of sorrow.  The love Brian’s Mom, Aunts and Uncles have for their matriarch is palpable.   They are rejoicing in the life they shared with her. While her passing is sad, their love will carry on forever.