About 8 years ago, I met two individuals that would change my life forever.  As with many things, we never know the full ramifications of decisions we make until many, many years later.  It is often in the most unusual of circumstances in which we meet people who have the most profound effect on our lives.

I grew up in rural New Mexico, just outside of a mining town.  To say we were of limited means would be putting it politely.  However, it wasn’t until college that I realized just how poor we truly were.  Somehow my parents seemed to keep things moving along, and it seemed I never wanted for much.  Later I learned, I never wanted for much, simply because I had been sheltered just enough, to not know there were so many things to want!  All in all not a bad way to grow up.  Ignorance is bliss as they say.

Coming from such a background, there was little emphasis on physical fitness.  I played some high school sports, but was rather limited in true athleticism.  At the end of my sophomore year, I quit sports all together.  Soon after, I picked up smoking.  At the time, it was the cool thing to do.  My father and grandparents smoked.  Cigarettes were readily available, also very easy to buy.  Within a couple of years, I had developed a pack a day habit.

At that point I was off to college, where the stress of a new life and social pressures seemed only to up my desire to smoke.  And within a few years I was up to a pack and a half a day.  Upon entering the job force, I stayed between a pack and a half and 2 packs a day depending on my stress level.

Around 26, I began to notice the deleterious effects 10 years of heavy smoking was having on my health.  I began to have the notorious smokers cough, and increasingly frequent sinus and allergy problems.   This, of course, was no surprise.  I had witness the havoc smoking reaped on my father’s health over the years.

After over a decade of smoking I began to look for a way out.  I tried the patch, the gum, cold turkey, among others.  I always returned to cigarettes.  It wasnt until 2 years later and starting with a new company, that someone referred me to a hypnotist for smoking cessation.  When I first learned about it I remember thinking it was incredibly expensive ($250.00).  Much contemplation ensued, at which point i said, “what the hell?  It’s only money.  You spend that much in two months of smoking.”

It’s the best decision I have ever made.  With the exception of a brief period , I have been smoke free ever since.  And it was incredibly easy!  I would recommend it to anyone.

Around the same time, I began a period of personal growth.  I wanted to figure out my life’s “purpose”.  I knew I had been put here for more than just punching a time clock.  I began to read numerous books, and follow several motivational speakers.  I truly found them fascinating.  I have often had the desire to be a motivational speaker.  It’s truly rewarding to help people find greatness within themselves, and assist them in unlocking their potential.

Tolly has the distinction of having taught Tony Robbins how to put on firewalks. It was with this discovery that I also learned Tolly was offering a “firewalk instructor training” workshop in a few short months.  This was the answer!  I knew I had to sign up for this course.  After much convincing of my husband, due to the hefty price tag involved, I signed up for his 3 day course.

The time flew by, before I knew it, I was on my way to mountains of central california to participate in Firewalk Instructor Training!  How cool is that?!  The seminar was definitely interesting.  There were participants from all walks of life.  A CEO with several of his managers, a husband and wife team whom were harp makers, an English motorcycle racer, a marketing manager from Mexico, and a husband and wife couple that ran a fitness boot camp in Southern California.

At the end of the three days, we participated in a “graduation” ceremony in which we were all granted the magical ability to host firewalks, with all the know how and veeerrrry little experience!  Sounds great!

I came home and set about putting together my first firewalk.  I had grand visions of this kicking off my motivational speaking career. I mean, who doesn’t want to firewalk right?  You’re going to walk across a 12 foot path of 1200 degree coals!

While putting together my first firewalk, I reached out to the husband and wife boot camp owners (Tony and Molli) I had met during instructor training.   I needed people to watch the fire and prepare the bed of coals, while I prepared my participants with my awe-inspiring motivational talk!  After a few emails, and only living about an hour away, they agreed.  I was hugely relieved!  I only barely knew what I was doing, so it was fantastic to have the additional help.

Several weeks later my first firewalk was a huge success.  I led a group of 15 people through a two-hour workshop and across a bed of 1200 degree coals with no injury.  Fantastic!    I went on to lead one additional firewalk in the months following.  Since then I have assisted in a variety of others.

Going into it, I had no idea how things would turn out.  While I only put on two workshops, my relationship with Tony and Molli flourished.  We became fast friends.  They are the most incredible people I have ever met.  Their background in fitness came at a perfect time.  I had just come off smoking for over a decade, and had gained a good deal of weight.  They provided me with a tremendous amount information about nutrition and fitness.  It’s because of them, I became involved in endurance activities.  Running, biking, swimming, and hiking.

One of the biggest take aways I learned from watching countless motivational speakers, they all have stories.  Really good stories of overcoming near insurmountable odds, going the extra mile, cliché, cliché, cliché.   After looking at my life, I realized, I hadn’t really been living.  Sure I had been doing what I was “supposed” to be doing.  I went to college. Found a mate. Bought a house.  Became a consumer.  But I wasn’t living.  I wasn’t experiencing the things in life I wanted to experience.

Today, while I haven’t become a motivational speaker, I have experienced more in the last 8 years, than I ever hoped to experience in my lifetime.

It is because of their influence I am tackling the Pacific Crest Trail.  They took my husband and I on our very first hike.  I remember it like it was yesterday.  Tony and Molli were training to hike Mt Whitney in a day.  An invitation was extended and my husband and I accepted.  The hike:  Mt Baldy in the San Bernardino Mountain range, via the Ice House Canyon Trail.

Mt Baldy summits at 10,068 feet.  Not an easy hike for intermediate folks.  A near killer for first timers.  Brian and I struggled.. and struggled…….. and struggled……….. (get it?  WE STRUGGLED).  After an arduous, long day, we summited. I was hooked.  Soon after I told Tony and Molli I wanted to hike Mt Whitney with them, merely 2.5 months in the future.  I trained every weekend.  And we successfully hiked My Whitney from Portal to Summit and back in a single day.

I have loved hiking ever since.  We have hiked many fantastic hikes in the west.  Mt. Whitney, Half Dome, Sedona, Havasupai Falls.  It was after summiting Half Dome, Tony and Molli began to talk about the Pacific Crest Trail.  They had heard about it somewhere and were rather enamored.  We talked about it at length, but never really thought it would be a possibility.  For various reasons we always wrote it off.  Molli isn’t a huge fan of camping.  Tony and Molli are inseparable.  Taking 5 months away from “real life” was an impossibility.

Until now! Unfortunately Tony and Molli are unable to join me for the thru hike, but I have a notion I may see them on the trail…. 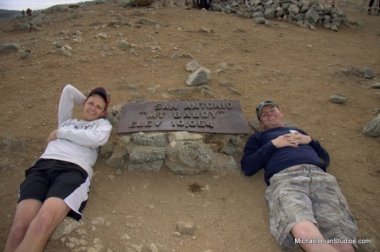 Tony Molli and I at the summit of Mt Whitney.

Spent several hours this evening packaging food for the trail. This is what 52,000 calories looks like. 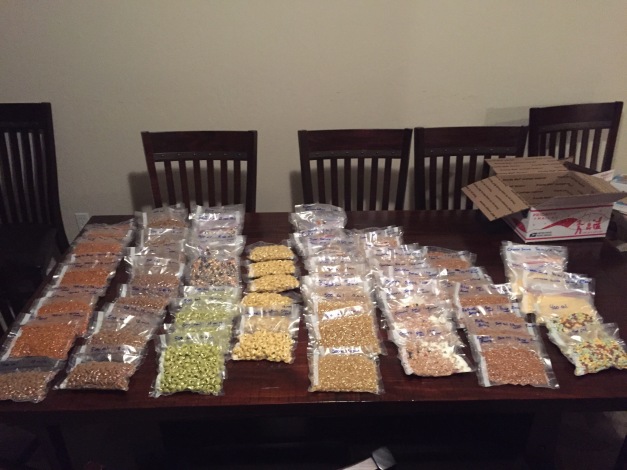 Images of the trail

Over the last several months I have had the opportunity to visit the southern terminus of the PCT, as well as where the trail crosses Highway 74 in Southern California. 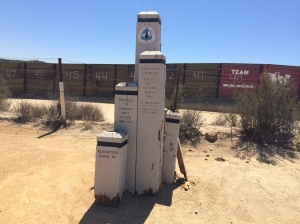 The Southern Terminus of the PCT

But my favorite picture of all is the PCT from the air!  I captured the image below while helping a friend relocate his airplane from Santa Rosa to Phoenix.  We made a weekend trip out of it, so we flew over the Sierra right around Mammoth.  It was an unexpected opportunity.

As we were flying along we were talking about my upcoming hike, and my friend asked if he thought we would be able to see the trail from the air.  We were flying at an altitude of 12,700 feet, and the Sierra top out at about 11,000 ft where we crossed the range.  Quickly thinking, I pulled out my Iphone and was able to determine how far we were from the trail using Halfmile PCT maps App.  It was pretty incredible to spot the trail in the clearing below.

PCT from the air.

I picked a hell of a time to add an additional thing to learn!   I have plenty to prepare for, however, I decided I also want to keep a blog of my journey.  The setup is rather frustrating, as I have never been good at design (of any kind, I missed out on that gene).

Hopefully my better half can help get this set up with a little more visual appeal!

About a week ago I made the big announcement on Facebook I would be hiking the Pacific Crest Trail. The outpouring of support has been amazing.

I had considered not posting anything at all about it and quietly slipping out of my normal life. I honestly didn’t think I would receive so much support. It’s not that I assumed people wouldn’t be supportive. I felt as though people would think I were crazy.

I’m sure people do think I’m crazy, however they are supportive of my craziness.

Planning for the trail is coming along well. I have all of my resupply points picked out. My maps and yogi PCT all separated by section of trail.

I will definitely have to stay after planning. While things are coming together, there is still a ton to do!